Mandate of the IMO

The purposes of the IMO include the provision:

– of ‘machinery for cooperation among Governments in the field of governmental regulation and practices relating to technical matters of all kinds affecting shipping engaged in international trade; to encourage and facilitate the general adoption of the highest practical standards in matters concerning (…) [the] prevention and control of marine pollution from ships’; and

– ‘for the consideration by [the IMO] of any matters concerning shipping and the effect of shipping on the marine environment that may be referred to it by any organ or specialized agency of the United Nations‘.

To this end, the IMO has the function to ‘provide for the drafting of conventions, agreements, or other suitable instruments’.

The IMO has 175 Member States, 3 Associate Members and 151 Observers (66 Intergovernmental Organizations and 85 NGOs – ACOPS was one of the first environmental NGOs to become an observer). Only Member States can vote.

Critically, the IMO is also the competent international organisation for shipping activities under the United Nations Convention on the Law of the Sea (the LOSC or UNCLOS), including for the establishment of international rules and standards to prevent, reduce and control pollution of the marine environment from shipping activities. Under the LOSC, globally accepted rules and standards established by the IMO are minimum standards to be regulated on globally by all states (importantly, flag states and coastal states).

This flows from the fact that (1) most of the 174 Member States of the IMO are a party the LOSC; and (2) for those states that are not a party to the LOSC, these provisions of the LOSC are now generally considered to have become part of customary international law, meaning that these provisions form part of the body of international law and are binding on all states. This also means, that rules and standards adopted by the IMO become applicable to all states, even to those states that may have not elected to become a party, from the moment that these rules and standards can be considered to have been globally accepted. There is a strong argument that from the moment that an IMO treaty comes into force (which generally requires that more than half of the commercial shipping fleet has become a party), this treaty sets generally accepted rule or standard for the subject it deals with.

Institutional Structure of the IMO

The IMO has 8 main organs, composed of an Assembly of all the Members, a Council of Members elected by the Assembly, a Secretariat and 5 specialised committees and their subsidiary organs.  The Marine Environment Protection Committee is one of these 5 committees.

ACOPS engagement with and work at the IMO

However, maritime transport is essential to the world’s economy as over 90% of the world’s trade is carried by sea and it is the most cost-effective way to move en-masse goods and raw materials around the world. Governments, industry and civil society must work together to regulate shipping impacts and balance freedom of navigation with other lawful uses of the sea, whilst ensuring that these activities have controlled and limited adverse impacts to the marine environment.

As an Observer to the IMO, ACOPS can exchange and collaborate with government representatives who take part in IMO meetings, industry representatives, other NGOs as well as the staff of international organisations; these meetings include those of the IMO Marine Environmental Protection Committee and its WGs. We also attend all meetings where issues we follow closely are discussed, especially sub-committees to whom the MEPC sends work, such as the subcommittees on Pollution Prevention and Response (PPR), which has been mandated to look at certain aspects of pollution from marine plastics from ships, and Ship Design and Construction (SDC), which is engaged on a revision of the IMO Guidelines for the Reduction of Underwater Noise. Meetings of the Maritime Safety Committee and its sub-committee on Navigation, Communications and Search and Rescue (NCSR) can also be relevant for routeing measures adopted to protect the marine environment. ACOPS has for example submitted several papers to such IMO meetings on marine plastics and underwater vessels.

Where we feel that it can be useful, we also submit papers for consideration by the Committees, Sub-committees or associated meetings, See the relevant ACOPS WG sections of this website for further details of our substantive  contributions. 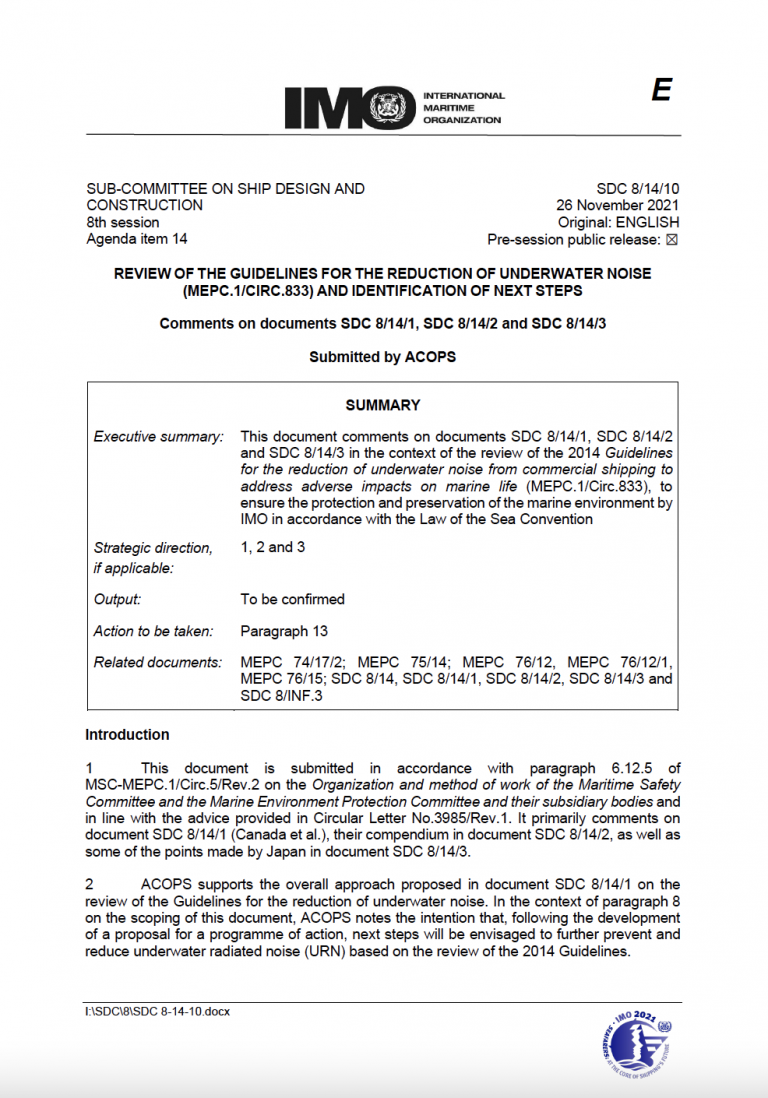 We also take part and support studies outside the IMO that can support IMO’s work, such as ways in which areas identified as ecologically or biologically sensitive under the Convention on Biological Diversity could be further protected from shipping impact through IMO measures. In this context, our work contributed to the preparation of a report on the prospects for IMO shipping measures to be adopted in marine areas that have been identified as Ecologically or Biologically Sensitive Sea Areas under the Convention on Biological Diversity. It is still open for comments.